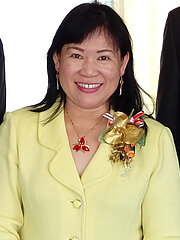 Dr. Christine Chang's Medical education began in childhood in her native Taiwan where she received special training in facial diagnosis, herbal medicine, TuiNa, Zen medication and Feng Shui. she later earned her MTOM (2001) and DAOM (2005) from Emperor's College, joining the college's staff in 2000 and faculty in 2003.

Since 2010, Dr. Chang has represented the TCM profession in the United States as a delegate to the International Organization for Standards (ISO) the Plenary Meetings of the TSO/TC249 at Beijing 2010, the Netherlands 2011, every year and HongKong 2017. She has previously served on the board of directors of American Association of Acupuncture and Oriental Medicine (AAAOM), a member of herbal committees in NCCAOM and represented the US as a member of working group on ICD11 in WHO.

Dr. Chang is the chief consultant to two major herbal companies and a member of the team the pioneered acupuncture in the emergency room at Good Samaritan Hospital in Los Angeles. Since 2004 she has served as interpreter for the lectures of Dr. WeiChieh Young, one of the foremost authorities on the Shang Han Lun and I-Ching, and the last living direct disciple of Master Tung, Ching-Chang.

Dr. Chang teaches in the master program, is a clinic supervisor and oversees the exterrnship program at the Venice Family Clinic. She maintains a private practice in Santa Monica.