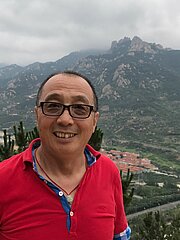 Prof. Dr. Li Jie has been practising TCM for more than 25 years in the Netherlands and Europe. Dealing with many different medical cases and complex modern miscellaneous diseases.
He is one of the founders of Qing-Bai TCM Academy in the Netherlands, the TCM Classical Research Institute and TCM School TOMO in Poland.
For more than 15 years he has been an advanced lecturer for the Dutch General Practitioner (GP) Acupuncture Association (NAAV). He was former academic supervisor for the Dutch Acupuncture Association NVA.
He is lecturing internationally and is an annual speaker at the TCM congress in Rothenburg (Germany). He is lecturing in many other countiries of Europe now.

• He is a board member of the World Federation of Chinese Medicine
Societies (WFCMS) examination committee.
• October 2016, He was the elected vice president of Committee of External Treatment Methods and Technologies, WFCMS.
• Since 2003 he has been appointed as a professor of Shandong TCM
University, Jinan China.
• He is also the holding director of the European Branch of “China National Inheritance TCM School, Qi Lu Miscellaneous Diseases”.
• He is a column writer for the Dutch Acupuncture Magazine Huang Ti for more than 5 years.
• Since 2005, he has focused on lecturing Classical TCM works, Huang Di Nei Jing, Shang Han Lun and Jin Gui Yao Lüe, Nan Jing, Zhen Jiu Jia Yi Jing, Zhen Jiu Da Cheng and etc.
• On May 31st 2011 Prof. dr. Li Jie was invited to give a guest lecture at Beijing University of Chinese Medicine (BUCM).
• He continuous involvement in the development of international education of classical TCM and advanced TCM lead and leads him to teach in countries like the Netherlands, Germany, Sweden, Switzerland, Austria, Poland, Rumania, Czech Republic, Denmark and China.
• He also holds a PhD in Western Medicine.
• He has published many scientific articles in the field of physiology, endocrinology and cell program death.

Search The Shadow of Jing Fang