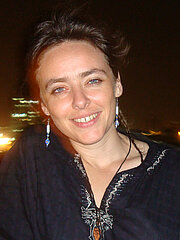 Rayén Antón started her path into Chinese Medicine in 2002 and then graduated as TCM practitioner in the Fundación Europea de Medicina Tradicional China in Barcelona. She continued studying various types of Japanese acupuncture with Stephen Birch learning Manaka style, Meridian Therapy and Shonishin, and graduated in 2007 as Toyohari practitioner with the European Branch of Toyohari Association. She has been working as well with Prof. Manuel Rodríguez in Barcelona for his TCM, Manaka, Meridian Therapy and Pediatric trainings since 2005, and was part of his clinic team since 2003; in 2010 she added running her private acupuncture practice in Barcelona.
In 2011 she started her path with Engaging Vitality studying with Charles Chace and Dan Bensky, and fully integrated the Engaging Vitality approach into her practice ever since. She teaches Engaging Vitality Core Modules in Europe, and Intermediate level Classes on the Ba Mai and fluids in Europe and USA.