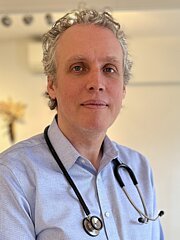 Robert Tristan Helmer R.TCMP, R.Ac specializes in the treatment of chronic, difficult to treat medical conditions that other doctors and alternative medicine providers are unable to help. His primary form of treatment to achieve this is customized Chinese herbal medicine formulas and acupuncture protocols. Rob’s recent research and subsequent published articles have focused on the area of insomnia and anxiety due to the increase in mental-emotional health problems since the beginning of the pandemic.

He has completed clinical practice/internships in China (four times), Germany and USA.  Robert is currently a professor of Traditional Chinese Medicine at OCTCM in Toronto and has previously taught at a number of TCM schools in Canada and the US and also has developed and taught post-graduate courses on insomnia, psychiatry, pediatrics, asthma and dermatology based on his own clinical experience and research. Robert is a published author and has previously appeared in various TCM journals (including numerous times in the Journal of Chinese Medicine and The Lantern)  and published a book by Blue Poppy press in 2006 on the TCM treatment of pediatric bedwetting. Lastly, he has been a student of many well respected doctors of TCM over the years in different countries including Dr. David Lam in Toronto, Bob Flaws and TCM dermatologist Mazin Al-khafaji including working at his clinic in England.

Understanding and Alleviating Anxiety with Chinese Herbal Medicine and Acupuncture